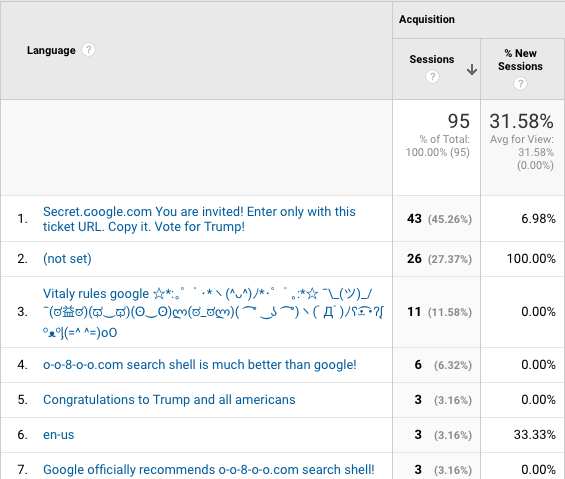 That’s the browser language settings for the web component of a small app I’m developing. Things to note:

Not pictured: this traffic is all from Russia. I’ve noticed similar patterns for this blog as well as other sites I run. The traffic centers in and around Moscow and St. Petersburg specifically.

This isn’t all that meaningful. It is strange though.

What does it tell me? These are almost guaranteed to be bots. They’re probably just scraping records somewhere and looking for exploits or places to spam. The person(s) behind the bots are from Russia or want to appear as though they’re from Russia. They really like Trump and… “Vitaly?”

Looking at whois records for that weird domain in the screenshot led me to an article that explains who’s behind the Trump spam. Apparently, a few people know about this Russian and his love for Trump.

It makes a bit more sense now. Other than there being no real reason behind it. And the motive being murky and confusing. It’s also seems less nefarious than when I first saw it.

It just makes it more annoying.

Another annoyance is I wish I could come up with some title like “From Russia, With Trump” or “From Russia, Love Trump,” but nothing sounded quite right.