The Night There Was a Fire in My Apartment Building

I don’t normally post personal articles, but last Tuesday morning at 4 am I awoke to my dog Rugby acting very strangely and running around the apartment. It took a few seconds for me to gather my bearings and get the grogginess out before I figured out what was wrong. There was smoke clearly in the air.

After getting my bearings and looking out the window, I quickly realized that the fire was in my building a few floors down. I quickly grabbed my dog, threw on some shoes and a jacket (my tired mind apparently thought that was important) and woke my roommate up.

I crawled across the realized we weren’t going to be able to go down the stairwell – it was a wall of smoke when I opened the door. I went back to my roommate and he had the idea of letting the firemen down below know that we were there. There was too much smoke outside his window for them to see us, so I went to go do the same from my window.

Just then, there was a tap on my shoulder, and a fireman in full equipment was there. He yelled and motioned to me to follow him and my roommate and I followed him to the fire escape. This was my first fire, so the fire escape wasn’t my first thought.

The funniest thing about the fire escape is that every other time I’ve been on one, they felt so unsafe and like I was going to easily fall off. Not this night, after the coughing from the smoke, that fire escape was one of the safest places in the world.

We climbed down the fire escape, me carrying my dog.

Then two of the only funny parts happened. When we got to the ladder at the bottom of the fire escape, there was a group of people. My roommate asked one woman, “are you okay?” To which she replied, “No,” while crying. His reply was perfect: “Well, none of us are ok, are you injured?” Which, afterward, was pretty funny to me.

The other was a fireman coming up the ladder and being near me while I’m carrying the dog and he says, “I don’t know what to do about the dog.” I threw Rugby in my jacket in case he squirmed – somehow my groggy mind was relatively intelligent, I just realized yesterday that I had even managed to grab his leash. But my thought was, “this is my first fire – how should I know what to do?!?”

In the end, we all ended up being alright, though we haven’t been able to move back in and everything smells pretty smokey. And Rugby has never, ever, eaten so well. 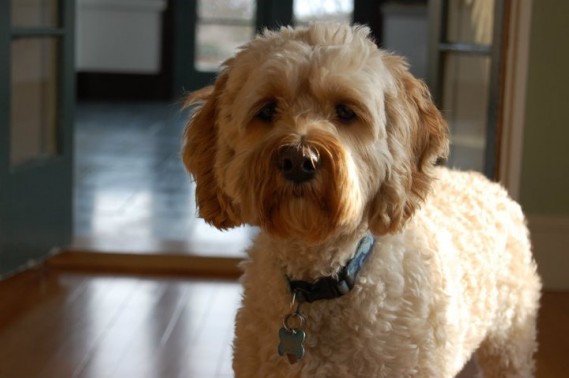 There are a couple articles out there with more about the fire and my dog with one with a video coverage and finally one about a cat that was also in the fire. Apparently people like hearing about pets!